I have been using my Enviro Grow (Pico W) for few weeks now.

What I noticed is that all 3 soil moisture sensors show almost identical values despite soil in 3 pots has different moisture levels. In addition, I had 2 sensors connected both showing around 82%, but when I connected another sensor with freshly watered soil, ALL THREE sensors are now showing 98%.

The pots are approximately 1m apart.

Did any of you had similar issue?

sounds like a code problem. Are the sensors all showing identical output are is it nearly identical?

the first would point to one value being accidentally copied to the others, and the second could be either the same sensor being reread, or the results of all being summed together.

The same sensor (connected to slot “A”) shows 57.5% when it is the only sensor connected, 76.5% when 2 sensors are connected and 96% when all 3 sensors are connected. Can it be the failed hardware (some frequency interference of sensors) or is it a software using other sensors as variables for its calculations? Should I flash the firmware?

hmmm especially with those readings it sounds like they’re all being added together. did you modify the code when you added the second and third sensor?

also had another thought, how do you have them wired?

Have you updated to the most recent version of the Enviro firmware? I think we’ve made some improvements to the moisture sensor code since the first version.

Thank you both for your input.

It looks like flashing the firmware helped. Let’s hope it stays this way. :-)

In addition, do you know what “voltage” feed suppose to send? I have a battery pack connected to the module and yet the feed shows “0”.

voltage was used to measure the voltage from the battery so you could see how much charge was left - but we temporarily removed the voltage reading code as it we found it was causing stability issues in some cases. If you want to try adding it back you can uncomment the section of code in your enviro/init.py (from line 106-121):

I have to apologize, I judged too quickly, unfortunately.

The behavior is the same. Below are the readings of the same sensor when 3 sensors are connected, 2 sensors connected and when it is the only sensor connected. The more sensors, the higher is the measured moisture level. 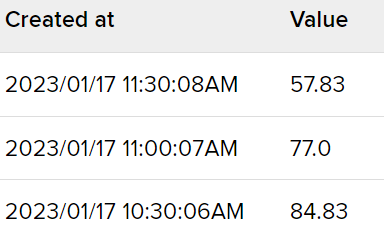 The main reason why I thought the issue was fixed with the firmware upgrade is that two pots were pretty dry and they did not influence the remaining pot with the overall “math” too much.

Update. As of today noon, the values of all 3 sensors are identical.

Of course, if I disconnect at least one sensor, the values of remaining sensors change dramatically.

It looks to me like a firmware issue. Am I really the only one who has this issue?

just a quick thought… mind I don’t have one to test, but I seem to remember there being a calibration step in the instructions I read (pretty sure it was for this) did you re run calibration after adding the third sensor?

Thank you for your input. I did not find anything talking about calibration. Could you please guide me how to perform it?

I can’t be sure how different the various grow sensor sets are, but these are the instructions from the PiHat version with calibration mentioned at the end, so YMMV

Note I’m snot sure if you should calibrate just one, each individually, all in the same pot