Hi, I just saw the Adafruit 2.13" Monochrome E-Ink Bonnet for Raspberry Pi - THINK INK - Pimoroni and it looks pretty similar to the InkyPhat, except it’s got a couple of buttons and i2c out, also it’s monochrome. Is there any way to add buttons to the inkyPHAT, or put a 3 colour display on the Think Ink? I understand that the removal of the mono chrome display would destroy the display, but if you have a replacement 3 colour display, could it work?

Theoretically, you could add Pimoroni’s button shim to add buttons. But you should carefully check the pinouts if the shim and the e-ink use separate buttons. This would be a slim and mainly plug&play solution.

Another option (which I typically use) are pin-multiplexers. You add the multiplexer to the Pi and then have 2x 2x20 pins. One 2x20 is for the display, the other exposes all pins. Then you can use any free pin for your buttons. This solution is better if you want to put the Pi and display in a case and the buttons somewhere else.

This may be one of the times where I’ve been too caught up on one view to see an easier solution. Thanks.

I’ve put the inkyPhat on a zero 2W in a FLIRC case it’s a nice little package. I even trimmed the pins down a bit to get it to sit flush. There’s some space next to the screen and you could easily fit some buttons there (like in the THINK INK) but wiring it all up has been a real pain.

You can mount the button shim under the header on the PI Zero 2W, then the inky goes on top. My problem is that it won’t fit in the case. I was looking at the buttons as the problem, not the case. if I just used a different case it’s all much easier… And I get an RGB status LED for free!
pHAT Stack Configurator shows no conflicts.

I just need a different case…

See here: GitHub - baralong/inky-gadget: Scripts etc for the pi zero with inkyPhat for where I got to with it all.

Thanks for sharing! I have a similar project GitHub - bablokb/raspi2go: Raspberry Zero as multi-gadget USB-stick but it seems I forgot the readme, but it has the systemd-service and the script and all is very similar to your solution.

I even designed a very special case because I did not want the Pi to stick out that much: 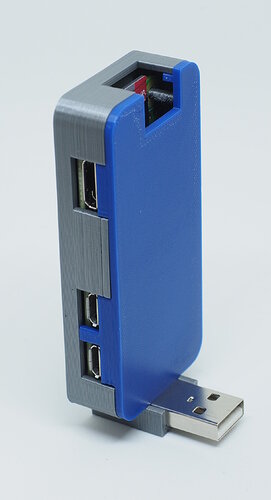 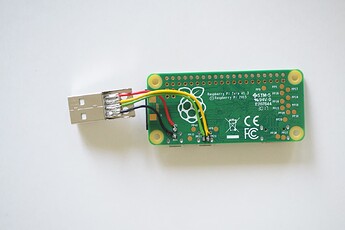 This is from the times where a Pi-Zero was cheap and you could risk loosing one.

Very nice! I just went with a micro USB cable. Your shell scripts are a bit more polished too. Nice case.

With a different case you could use this Pi Zero USB Stem - Pimoroni or Solderless Zero Dongle for Raspberry Pi Zero - Pimoroni but yours works just as well.

Yes. I have the Stem too, and one from Geekworm which is very similar. But with both the Pi-Zero sticks out too far and I fear to break the usb-plug if I’m not careful enough.

I also thought about adding a display, but I am currently busy with other projects.

One thing which turned out useful for me is to switch the Pi to read-only mode. You don’t have any problems anymore when you just unplug it (or shutdown the PC). Switching to read-only mode is very simple, but it is hidden within raspi-config (->Performance Options → Overlay Filesystem). But it depends on your use-case if read-only mode is useful or not.