Wow what an improvement between the Zero 1 & the Zero 2

Then of course the chip shortage really kicked in!

Then the scalper’s came along!

Then that total ****** “oh whoa is me people hate me because I threaten them Putin” invades Ukraine*! *pushing up the price of helium!

THEN I spot a Raspberry Pi Zero 2 W Essentials Kit … get in!!!
Ok it was a bit more than just a Z2W but it was cheaper than Ebay and came with stuff I was going to buy at some point!

Anyway moving onto the GPi case, I did originally try a Zero W but was it sluggish? Lets just say that you could wait days for the screen to update!!

With a quad-core 64-bit ARM Cortex-A53 processor clocked at 1GHz and 512MB of SDRAM, the Zero 2 is up to five times as fast as the original Raspberry Pi Zero.

Overclock it a bit and you’d likely get close to 3A+ performance.

I did some measurements in the past comparing current and energy. It turns out that even for battery-based projects with a typical “work - do-nothing (or even shutdown) - work - …” cycle the Zero2 is better than the Zero-W. This is due to the fact that the Zero2 is faster at finishing the work.

Here a two graphs. One is with work that keeps all four cores busy: 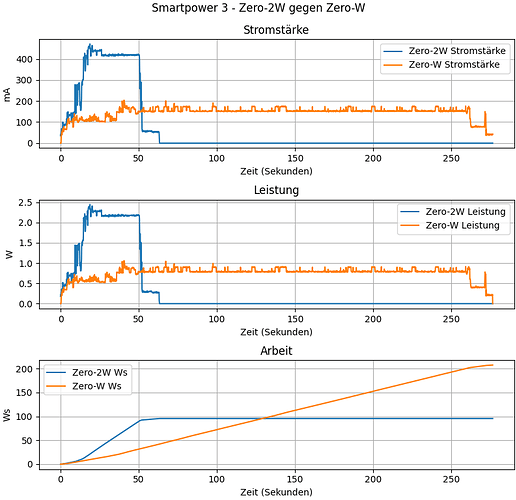 The second one is a load that only uses one core: 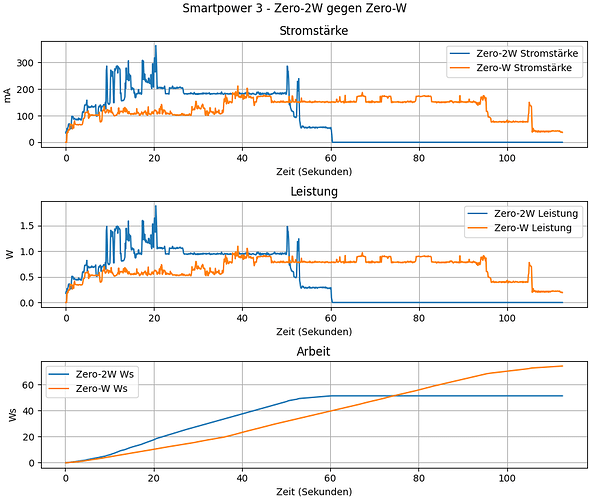 There are still some reasons for sticking to the original Zero-W: lower max-current, lower-price, less heating. And for many applications even the original Zero is good enough and therefore the best choice.

Yeah, it’s ridiculous how hard the 2Ws are to get. I’ve been looking around for months, no chance.

Great work! It would be cool to compute the integral for the graphs so that you have one number to compare.

The third graph is the intregal (cumulative sum over time) of the second.

I hang out on the Pi forum a lot. Aside from the chip shortage, they alternate production runs of the various models. What gets made often depends on what SOC is available, and what RAM they can get their hands on. They also try to even out what quantity they send to Approved Retailers.
Clift Notes Version, blink and you have missed your chance. There was a time when I would add a Pi Zero to any order I was placing. If it wasn’t for the chip shortage, I’d be doing the same thing but with Zero 2’s.