All the guides/instructions on the support pages are followed to install the necessary packages.

The install.sh script detects and recognises the I2C device, and records that the packages are all installed. The install.sh script however does not detect the SPI device (this is not unexpected considering some of the details I have managed to glean from documentation and/or forums). As per below:

Nothing to do! Press enter to quit…

The st7735 packages are installed for the SPI LCD.
But running the python scripts in the examples folder are (all) unsuccessful.
See for example:

gif.py - Display a gif on the LCD.

First there is only one SPI slot, so the messaging leaves a little to be desired (although I understand the code is for the full garden and not the mini designed for the Pi-400).
Second the Breakout Garden slot is occupied by the 0.96 SPI LCD. When I put the LCD in the Garden the screen backlight illuminates … so power is clearly getting through to it.

The Breakout Garden also has a I2C BMP280 in the appropriate slot. That is detected as noted above.

So I am at a loss what to try next, given that I have followed all the online guide/instructions I can find and trawled this forum for advice/information and basically have tried it all (!!!), so far to no avail.

TIA for any advice/info offered.

Manually double check that SPI is enabled. I have gotten those weird “file not found” errors only to find out it was because SPI and or i2c was not turned on / enabled.
The other thing to check is that the example is using the correct CS (chip select) pin.
Try cs=1, or cs=0,
On the Breakout garden Hat the front slot is port=0 and cs=1, and the back slot is port=0 and cs=0.

D’oh! What a flippin’ idiot. ME that is!
SPI was not enabled.
Once that minor wrinkle was sorted out, then all well! 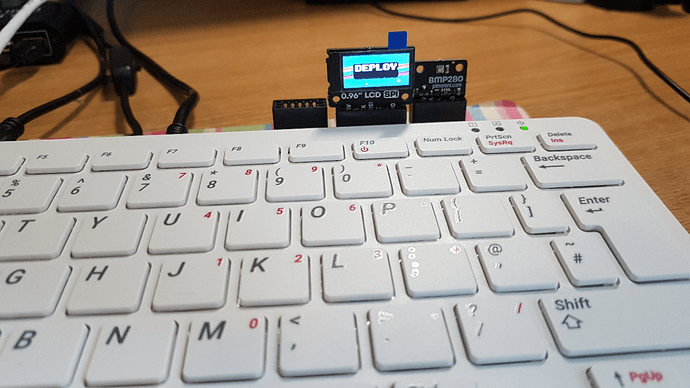 Aiming to display a few home office parameters (IP, temp, that sort of thing) on the now functioning LCD.