I’ve got a plasma2040 running with some LEDs which I want to use in a small greenhouse to provide light. I’ve got an outdoor socket, so I can run a 5m usb-c cable to provide enough power, the load is fine.

The led strip has a waterproof sleeve, I can hot glue the ends. However the plasma board is bare and I want to ensure the buttons can be pressed. The location is under the front frame of the green house (it’s about 1.2m tall). The location doesn’t get direct rain, how much do I need to worry about waterproofing the plasma. can I splash some 422C silicone conformal on it and hope for the best or should I build an enclosure?

Actually a “how to waterproof thing” learn article would be really helpful for this sort of thing.
thanks!

We’ve used naked Plasma 2040s temporarily for sheltered outdoor stuff without issue (like attaching LEDs to tents at EMF!), but yeah, I think some waterproofing or an enclosure might be a good idea if you’re planning on installing one outside permanently.

I also bought some wide heatshrink (after reading about it in this tutorial) but I haven’t had a chance to play with it yet - might be a good option for keeping access to the buttons? Becky Stern at Adafruit has done lots of cool stuff about waterproofing/ruggedising electronics - Rugged Wearable Electronics - YouTube

thanks Hel,
that’s a really detailed response. (Sorry busy day)
I’ve got a compost temperature sensor running off a RPI zero talking to HomeKit, but that’s a DS18B20 on a long cable, via a duct in my shed.

The Adafruit tutorial is really helpful. I guess I just need to settle for external buttons and heat shrink wrap them, as you suggest.

Wildlife camera after this one
Many thanks Gavin

Hi - just following up as I had the same idea having just taken my 2040 plasma christmas decorations down! My idea is to put the lights up in the garden (and maybe try to port a flaschen taschen server but thats a bigger thing…)

@zzgavin any updates on how you got going? Also when you say the Leds have a waterproof sleeve did you mean how they come in the kit or something else? The leds look waterproof ish to me… the 2040 I can put in a waterproof box etc.

I’ve seen one trick I really loved, which was to use a vacuum sealer. put hole for the wiring at the already sealed end, place electronic inside, thread through, seal the hole with silicone sealant, and vacuum seal the open end as normal. Not supper rugged, but it’s weather proof, soft enough to access built in buttons, and safe from condensation in changing temperatures.

you can do the same thing with a plastic sandwich bags (even custom size it using a foam cutter, soldering iron, or hot knife)

For any fully sealed outdoor electronics enclosure, silica desiccant packs* are awesome at preventing condensation. If they’re hard/cruchy sounding they’re good, they turn gelatinous when ‘used’. you can ‘recharge’ used ones by setting them in the oven at lowest heat for 5-10min (basically, heat > 100c/212f to boil off the moisture) 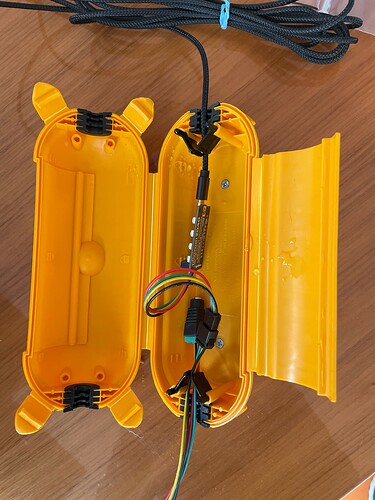 I used one of these £5 waterproof boxes and a long usb c cable in the end to do some outdoor Christmas lights. There is a little water ingress you can see near the usb c connector. The orange box is meant to be for 240v mains cable, so not quite as narrow as needed, I should have added an additional bit from a gland. Also the wrapped usb cable acted as a capillary to draw some of the rain in. Didn’t affect the LEDs though.
Used an hsv arc from 270 to 360, so purples, pinks and reds. Changing colour every tenth of a second along the 150 lights at random.
Good to have some unique Christmas lights